For the Love of Santa 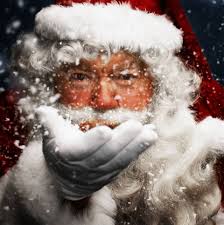 My mother had her share of lucid moments here and there during the thirteen years of her illness. While the rest of the year she remained confined to bed, at holiday time she did her best to rally for a day or two to show me the beautiful woman beneath all the surface strife.

One of her shining moments was the day she told me the truth about Santa Claus. We were in the
living room at 16 Wilbury Place in Buffalo, New York. The stockings still hung over the brick fireplace and a Douglas Fir tree glistened in the front alcove with too many strands of silver tinsel tossed in random fashion by my own ambitious hands. The tree proudly displayed our old handed down glass ornaments that glowed in the light of an old-fashioned string of screw-in colored light bulbs. Douglas Firs were the cheapest tree at that time, but boy did they smell good!

A handful of my friends considered themselves on the cusp of adulthood, too grown up to deal in childish ways of years past while I still maintained a relationship with my dear conspirator in the occupation of love, Santa Claus. I’d captured him in my heart and he would have to be wrangled away or remain there forever.

Several of those so-called friends elevated themselves by making fun of the fact that I had written to the Man in Red, asked for and received yet another doll from the Jolly Old Elf at the vulnerable age of thirteen. Well aimed hits on my personhood, such as “Only babies ask Santa for dolls,” plagued my sense of self-esteem and I did not appreciate the accusations. Peyton Place had nothing over the scandal on Wilbury Place.

Wise woman to her core, Mom felt my rising angst on the topic of Santa and she knew I would no sooner give up dolls than say goodbye to the benevolent elf of the North Pole. Dolls were my family, my only siblings, and my practice children and I loved them dearly. Looking forward to my correspondence with Santa each year got me through the long days of my mother’s illness. In spite of her condition, Mom desperately wanted to relieve the pain of my transition from child to pre-adult, no easy task and she wasn't about to take Santa away from me.

I imagine she intuited that I was dealing with Santa’s existence in my own way, that I already knew in my heart of hearts that our chimney would never see one black boot or red velvet suit or beard white as snow. Mom prevailed. She sat down in the rocker nearest the tree where I sat on the floor studying the disarray of unwrapped gifts displayed at its base a few days after Christmas.

“Robin, you know what your friend’s say about babies being the only ones to ask Santa for dolls?” she asked.

“Yes.” I answered, half expecting her to say the day had come for me to grow up.

“Well, first of all if they’re referring to YOU, they’re wrong. You are NOT a baby!”

My ears were open.

“You are my beautiful daughter and I’m so proud of you and everything you do.  And…I know how much you love your dolls.”

Her words pricked holes in my tear ducts with the knowledge that she felt guilty for not having produced a sibling for me to grow up with.

“You know who Santa is don’t you?”

I sat frozen in silence, staring down at the new Penny Brite doll among Christmas boxes of shirts, slippers, and games, my gaze blurred with tears.

“Santa isn’t a person,” she said. “Santa is the Spirit of Christmas. He represents generosity. He is everything good and kind and loving that lives inside of you and all who open their hearts to know him. Santa is something you can believe in for the rest of your life and I hope you do.”

A couple of tears escaped and I scrambled up to wrap my arms around her, my sensitive, thoughtful Santa Mom.

“One more thing,” she said. Mom got up and disappeared around the corner to my Dad’s study for a few seconds. She returned with a shoebox-sized box wrapped in candy-stripe paper topped with a big red bow and handed it to me. “I know Christmas was a few days ago but this is special from me to you.”

True to the little perfectionist I was fast becoming, I unwrapped the package as if lightening would strike if I tore one tiny corner of the paper. My chest swelled with sunshine when I saw the sweet baby doll swaddled in a white lacy “Christening” dress, matching bonnet, and booties.

“I picked this one because she’s soft and looks like a real baby. I wish I could give you a brother or sister but it’s not happening. For now, she can be your baby sister.”

The doll was more than special. Yes, she had the soft look of a just born infant and she smelled delicious like all new dolls just out of the box, but much more astonishing was the fact that my mother had gotten out of bed and had gone to a store to pick out the doll herself. Mom hadn’t done trips to stores for anything in years.

The baby doll wore the proper sacramental attire, but I’d been the one baptized into a new phase of life by someone whose wisdom was never fully recognized. Mom’s Santa bore little resemblance to the Santa of magazine advertisements and department stores. Her adaptation might have held a vague shadow of similarity to the early St. Nicholas or Thomas Nast’s Santa, the saint’s namesake, but in truth this spirit was my mother’s construct born out of her love for me.

As a rookie teen I could have been angry about the whole charade; the milk and cookies for the big guy and carrots for Rudolph, the trips to department store Santas, the letters “To Santa,” the elves, flying reindeer, and presents “From Santa,” the collusion with other Santa espousing parents. But I wasn’t angry. It was impossible. I loved the ritual that began every year with an advent calendar on December first.

By telling me her version of Santa, Mom trusted I would sort through the whole thing and sort I did. What would I do without a long string that stretches back in time and connects me to my childhood wonder - wonder that is palpable in the children’s stories I write and the fascination I have with Nature? Where would I be without a jolly “Ho, ho, ho” once in a while far beyond the season of Santa? Where would any of us be without Santa’s good humor? Imagination. No one can tap into imagination if you don’t carry an image in your mind of reindeer that can fly and elves that build millions of toys by hand, on request, in less than a year. Imagination will fail you if men in red suits with bellies like bowls of jelly can’t slip easily down slender chimneys or drive a sleigh through the starlit sky and deliver those millions of elf-built toys to children around the world in one night in all kinds of weather.

Mom knew I would need all of what I gained from the childhood fantasy that is Santa Claus as I entered the oftentimes too serious journey toward what we call adult. She knew I would need the hope and the laughter that Santa provides so I could endure the days when things don’t go the way I want them to. She knew the importance of embodying wonder, the miracles, and suspension of disbelief that Santa’s spirit offers. For all Mom’s wisdom and the beauty she rendered by asking me to BELIEVE as a tiny tot and a budding adult, I am grateful.

From a heart that still holds tight to the magic of Santa, may you capture your own Spirit of Christmas and never ever let it go. Merry Christmas!