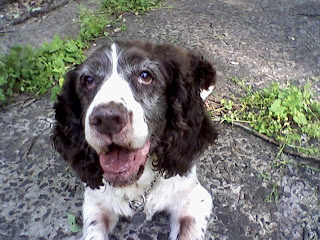 What is the Weight of a Beloved Pet?
One of my favorite stories is by Kurt Kauter from “New Fables – Thus Spoke the Maribou,” translated from German.
“Tell me the weight of a snowflake,” a sparrow asked a wild dove.
“Nothing more than nothing,” was the answer.
“In that case I must tell you a marvelous story,” the sparrow said.
“I sat on a branch of a fir tree, close to its trunk, when it began to snow, not heavily, not a raging blizzard, no, just like a dream without any violence.  Since I didn’t have anything better to do, I counted the snowflakes settling on the twigs and needles of my branch.  Their number was exactly 3,744,952.  When number 3,744,953 dropped onto the branch, ‘nothing more than nothing,’ as you say, the branch broke off.”
Having said that, the sparrow flew away.  The dove, since Noah’s time an authority on the matter, thought about the story for awhile and finally said to herself, “Perhaps there is only one person’s voice lacking for peace to come about in the world.”

At first I wasn’t sure why this story came to mind as I thought about the recent passing of my dear four-legged friend Mickey.  When she first came to live with me, all I could think about was having a soft, furry buddy to cuddle, play, and walk with.  I had no idea how great an impact she would have in my life, like  no other pet before her.

We shared a life together for 14 years, the longest of any pet I’ve ever had.  When I brought her home, at age 2 ½, my friend and I smiled and laughed as she jumped out of the car and ran the perimeter of the property as if she knew she was finally home.  Laughter occupied a huge space in the hours we filled together and Mickey became known as my “clown.”  I never thought to count the number of smiles and laughs she gave me, but I’m sure it came close to the number of snowflakes that broke the branch in Mr. Kauter’s story.

Sometimes her clowning fell softly like snowflakes; gently like a dream.  I smiled when her tail wagged like a frantic metronome over the slightest thing; licking an empty peanut butter jar or tuna can, anticipating a biscuit, or detecting a mouse hiding in a cold air return.  I laughed at the sight of her keeping pace with the lawnmower; back and forth, row by row, for three hours, devoted to every step without so much as a blink in the direction of a passing squirrel.  Staying true to the retriever instinct of her breed, I watched that crazed tail wiggle proudly as she repeatedly dragged a stringer of fish out of the water, as happily as if she’d just hauled in a freshly shot goose.

Other times her clowning was like the raging of a blizzard when she would tear around rolling out the proverbial red carpet for me when I got home from work, or after a two minute trip to the mailbox.  She would often throw fits of barking when I danced wildly in the living room. So to quiet her I reached for her front paws and we waltzed together. She barked even more when required to be my protector against trash men, strange cars in the driveway, gusts of wind, or unexpected plastic bags waving on the breeze during our morning walks.  When the sun shone through the crystals hanging in the kitchen window, her favorite game, next to “chase the flashlight,” was “chase the rainbows” of color reflected on the floor. Her energy seemed inexhaustible as she pranced and pounced over and over again.


If I anyone had wanted to buy the pounds and pounds of fur I sheared from her elf-sized body, I would be financially wealthy.  Furthermore, had I collected all the fur she shed in and around this house, I would have a fur ball the size of Texas, and then some.  Instead I am rich beyond measure with fond recollections of moments I would not trade for anything.

She was no lightweight when I came home exhausted from a long day and she plopped herself in my lap, pulling at my arm, and barking out a plea for playtime.  Fifty pounds felt more like one hundred on those occasions and it weighed heavily on my heart when I was too tired and had to tell her “No!”  Finding this an unacceptable answer she would inevitably turn her head away sharply for a few seconds, then begin her insistent begging once again, causing me to muster enough energy to afford her a brief romp on the floor.  There we would have a tug on squeaky “Bunny,” have a ball toss, or just be dogs together.  Yes, I admit to barking, rolling, and snorting beside my canine companion, just so she felt more at home in the confines of a human domain.

There were times when my heart was heavy, so heavy, with grief, with sadness when human loved ones were lost through death or desertion. Mickey helped carry the burden, lifting my sagging spirits with her warm, fuzzy softness pressed up against me.  Over the years I’m sure I lost several pounds as I bathed her brown and white coat in my tears.  Sometimes the tears bore the weight of heartache over Mickey’s own pain; when she suffered summer after summer with skin allergies, or when she had unexpected, violent tummy upsets, and other emergencies.

When Mickey ran the circle around the yard on that first day here, it symbolized the hundreds of circles she would eventually run around my heart, binding us forever in a sphere of unconditional love.  No one being has ever been so incredibly forgiving of my flaws and limitations.  She remained true during long stints in the kennel when I was off on vacations or training trips.  She forgave that I was often too tired or lazy to play, or groom, or spend quality time.  She overlooked longer than expected days away that found her crossing her legs and feeling lonely.  She still wanted to cuddle when her meals were late or I forgot her treats.  How do you weigh that kind of long-enduring relationship?

There isn’t enough gold or enough snowflakes to equal the wonderful memories bestowed on my currently aching heart.  I know the hurt will lighten as time goes on and the significance of one small dog will continue to fill me.

Mickey was a tempest of the best and most difficult experiences one can encounter in any bond; human to animal or human to human.  Surely she was, as all dogs are,  a teacher of all the ingredients for peace - love, compassion, patience, and forgiveness. For anyone who has never let one of these four-footed lovers into their home and allowed their hearts be broken open, to discover the power of creature Presence, I say, perhaps there is only one person’s understanding lacking, for peace to come about in the world.


This won't be my best artistic attempt at writing.  I'm just writing from my heart and the heck with whether my technique is spotless.

I tend to think differently than the whole rest of the world on certain issues.  Today's issue, and one that has been with me for several weeks, is the euthanization of pets.

Sadly, my 16 year old dog, Mickey, is failing, more so the last few days.  She's slowing down her eating and I have to help steady her when she eats or drinks or goes outside.  She's sleeping a lot more and her back end is weak.  She cries sometimes if she wants to get up but can't.  And then I help her go where she wants to go.  She has accidents and I clean them up, sometimes in the middle of the night.  Her breath is bad and sometimes her fur smells because I can’t get all the urine cleaned out.

Several people have been talking to me about ending her life.  They say that is the "kind" thing to do because they think she’s suffering.  I've been told it's the "right" thing to do since she can't enjoy being a dog anymore.  I'm also observing how distressed these people are seeing her "suffer."

From my perspective life is messy, death is messy.  Death, as well as life, often contains suffering for both the person dying and for those observing.  I don't feel I have any more right to make a decision to end Mickey's life than I would to end a beloved human's life.  If a human wants to make that decision for themselves, that's one thing, but making it for them or for a pet...I have trouble with that.

If Mickey was wild, I suppose she would go out in the woods and fall asleep.  While she was sleeping one of her long sleeps a predator would probably come and take her life.  But she's not wild.  She is in my care and I feel I'm doing what I'm doing because I love her.  I'm fully rational and I fully realize she is dying, but I can't rationalize taking her life.

I watched my girlfriend's mom during the last year of her life and it was hard seeing her failing.  She was not the human she once was, couldn't enjoy things she once did, she had accidents, had to have help eating and going to the bathroom, we had to help her sit or walk, and she often moaned or cried out her grief for the way she used to be.  Nobody suggested that she should be euthanized.

So I've concluded that humans have made pet euthanization the norm because it is often THEY who are suffering as they watch the pet fail, just as often as that the pet is suffering.  I feel it is THE HUMAN OBSERVERS being emotional about her perceived suffering, not me being emotional that I’m losing her. I'm sad that Mickey is failing, but I’m ready for her to go and feel a lot of love when I can help her.  I believe she feels the love too because she often finds her way to be physically close to me, the way she always has, to be comforted.  I think if she was in physical pain she'd be somehow showing it and maybe I'd feel differently.  I feel like I need to sequester myself with her until the end comes so that no one else has to "suffer" watching her process and try talking me into something I don't feel right doing.

I may be in the smallest minority with this viewpoint, but I know I’m not alone.  Someone posted on Facebook about 6 months ago, a story about a woman and her elderly dog that I’ve not forgotten.  The dog could no longer walk, but the lady made a special cart for him and took him to hospice for visits.  He ended up being cherished by all the patients because they could love a creature that was in the same condition they were in.  I thought that was beautiful.  The dog finally just went to sleep one night.

Every morning I check Mickey’s breathing, hoping that maybe she's fallen peacefully asleep for the last time.  I pray it's that way for both our sakes.  Meanwhile I will love her the best way I know how…the way I would love any human who was preparing to leave this mortal plane.