An ethereal voice called out and woke me from an all too rare sound sleep, “Langston Hughes!” 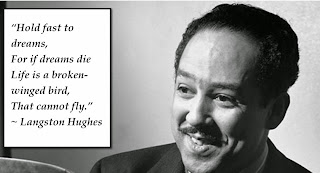 “What in tarnation – to coin one of my Dad’s favorite expressions – could that be about?” I thought.

In the wee pre-dawn hour, with no clue of the whys and wherefores, I stumbled to the kitchen to write down the name. Back at my still warm pillow I reprimanded myself that solving this mystery would have to wait until morning; knowing my female brain to ruminate over such things to the point of bleary-eyed exhaustion.

The name Langston Hughes has flown in and out of my awareness, once, twice, maybe three times in my life, like an elusive bird. Try as I might I could not resurrect any memory of who this man was or what he stood for. Cup of tea in hand and autumn sun well enough above the hilltops to clear the fog in my head, I began the search.

Nothing that I read about the man sounded familiar except for a vague recollection that he was a poet. He was also a novelist, playwright, and columnist. I learned of his African American and mixed Caucasian ancestry, the history of his rise to fame, and his dedication to writing for a cause.
So why did this guy call out to me in my slumber?

It was immediately clear that Langston and I share something in common. We are dedicated writers with a “mission.” Another thing that stood out to me was that he was a social activist, very concerned not only for the welfare of the “negro,” the term in his era, but also that of all people who were downtrodden and struggling to survive within very unbalanced social and political structures.

After reading two of his poems I came upon “Let America be America Again,” whose passionate strains are reminiscent of my recent frame of mind and I suspect the state of millions of minds in this good ol’ U.S. of A., based on what I see on social media and hear in the general population. How many of you, like me, have turned toward fantasies of “the good ol’ days when everything was hunky dory?” That would be me, longing for an escape from all the front page newsy horrors.

Sorry, but it just isn’t true. We’ve never had “hunky dory.” Mr. Hughes poem sparked memories of my own mother making the news when she wrote to President John F. Kennedy regarding the threat of the atom bomb, and received a reply that directly addressed her concerns. She was also recognized in the small town of Hornell, N.Y. for writing to Nikita Krushchev, appealing to him to make peace with our country.

“Let America be America Again,” brought back the confusion of my very young self, curled up under a desk or crouched low with my head smooshed against the school hallway wall, supposedly to protect against the fallout of the deadly A-bomb. More smooshing, voluntary this time, behind living room furniture occurred during the televised funerals of J.F.K., R.F.K., and Martin Luther King whose deaths were too much for my little brain to wrap around. Then there was the crush of hearing that my best friend’s sister’s boyfriend was killed in Viet Nam and later worry that my own dear male friends would be taken away.

Ah-ha! The light bulb virtually burst over my head! I’ve heard it said that once your spirit returns to the ethers, the highest wisdom is available. It seems as though my spirit and the spirit of Langston Hughes met up in dreamland. His voice was speaking loud and clear now! "I did not steal you from your pillow to tell you to dwell on what is wrong in this world now or in the past!" He cried out to appeal to the mission I’ve committed my spirit to; the power of Love. In his own way he made me see, from the perspective of the Eagle, the reality of the timeline that was strewn across the furrows of my mind.

You see, Langston was reminding me that although he could only observe and experience the dreadfulness of racism and poverty in his lifetime, he missed the victories achieved after the efforts of M.L.K. and many others. He did not live to see how his own work has affected the esteem of millions of people and will most likely continue to do so. This very morning he made me see how it is all cyclical, the struggles and the victories, and how the power of Love plays into it all.

The power of Love is what lies behind every concerned heart that keeps passion alive and never gives up during times of political, social, personal, and environmental stressors. The power of Love fueled Langston Hughes to make manifest his impassioned works. The power of Love has brought the human race through seemingly impossible trials and into this millennium. And it is the power of Love that will guide us to stay the course in our current troubles and help us rise out of them.

Imbalances were made to come into balance again. Langston Hughes demonstrated that all people are made of and for Love and “We the people” have what it takes to make America, America again! Thank you Langston Hughes for your timeless message!

(America never was America to me.)

Let America be the dream the dreamers dreamed--
Let it be that great strong land of love
Where never kings connive nor tyrants scheme
That any man be crushed by one above.

(It never was America to me.)

O, let my land be a land where Liberty
Is crowned with no false patriotic wreath,
But opportunity is real, and life is free,
Equality is in the air we breathe.

(There's never been equality for me,
Nor freedom in this "homeland of the free.")

I am the poor white, fooled and pushed apart,
I am the Negro bearing slavery's scars.
I am the red man driven from the land,
I am the immigrant clutching the hope I seek--
And finding only the same old stupid plan
Of dog eat dog, of mighty crush the weak.

I am the young man, full of strength and hope,
Tangled in that ancient endless chain
Of profit, power, gain, of grab the land!
Of grab the gold! Of grab the ways of satisfying need!
Of work the men! Of take the pay!
Of owning everything for one's own greed!

I am the farmer, bondsman to the soil.
I am the worker sold to the machine.
I am the Negro, servant to you all.
I am the people, humble, hungry, mean--
Hungry yet today despite the dream.
Beaten yet today--O, Pioneers!
I am the man who never got ahead,
The poorest worker bartered through the years.

Yet I'm the one who dreamt our basic dream
In the Old World while still a serf of kings,
Who dreamt a dream so strong, so brave, so true,
That even yet its mighty daring sings
In every brick and stone, in every furrow turned
That's made America the land it has become.
O, I'm the man who sailed those early seas
In search of what I meant to be my home--
For I'm the one who left dark Ireland's shore,
And Poland's plain, and England's grassy lea,
And torn from Black Africa's strand I came
To build a "homeland of the free."

O, let America be America again--
The land that never has been yet--
And yet must be--the land where every man is free.
The land that's mine--the poor man's, Indian's, Negro's, ME--
Who made America,
Whose sweat and blood, whose faith and pain,
Whose hand at the foundry, whose plow in the rain,
Must bring back our mighty dream again.

Sure, call me any ugly name you choose--
The steel of freedom does not stain.
From those who live like leeches on the people's lives,
We must take back our land again,
America!

O, yes,
I say it plain,
America never was America to me,
And yet I swear this oath--
America will be!

Out of the rack and ruin of our gangster death,
The rape and rot of graft, and stealth, and lies,
We, the people, must redeem
The land, the mines, the plants, the rivers.
The mountains and the endless plain--
All, all the stretch of these great green states--
And make America again!