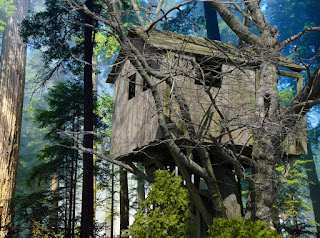 If you’ve been following this thread of “Summer Memories,” you know that I started out finding a
“spirit rock” and had followed the spirit line it contained like a road to the past. As I stood holding the rock at creeks edge, my mind part way between now and the then, a frog jumped into the water leaving ripples in his wake. I recollected a frog making the same plop sound way back when as he jumped into the shadows and hid himself from perceived danger when my friend Judilee and me appeared to catch tiny fish and pollywogs swimming in the warmer sunlit pools. Later my little friend and I bugged her brothers to let us join them in the treehouse her dad built the summer before. They claimed “boys only” and went about their manly impersonations. We girls were oblivious to any danger in our quest to gain entry to that treehouse. If the boys could scale the makeshift ladder, so could we. The boys heard us coming and reiterated “No girls allowed!” from their lofty perch. Our victorious giggles rang out across the cow pasture after Mr. Shea stopped his tinkering long enough to call to the boys “Let the girls come up there now, ya hear?”

We scrambled up the ladder, climbed hand over hand, and when I reached for the next handhold near the completion of my goal, a broken branch stabbed my palm. I struggled back down with one bum hand held protectively at my side and ran through the back door wailing a pained cry. I held out my injury to Mrs. Shea who turned to a nearby cupboard and grabbed a tissue for my tears and a clear unlabeled jar filled with who knows what. She dabbed the mysterious, mustardy yellow, foul-smelling salve onto the wound, bandaged it with gauze and tape, kissed my cheek, and hugged me. “There. It’ll be fine.” She smiled down at me and I trusted her faith that it would indeed be fine and when she said I could tackle that ladder again, I believed her.

In later years I referred to Mrs. Shea as my second mom for all that she brought to my life. She remains at the top of the list of many loving adults who cheered me on as I grew. Her husband remains in my heart for similar reasons but I’ll save that for next time. Until then breathe in the beauty of this day, your day, and the Earth that supports you! Wishing you well in it!

What are some of your summer memories? I'd love to hear!
Robin